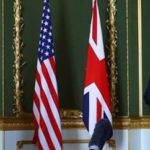 The United Kingdom and the United Arab Emirates have an extradition treaty that should be suspended until the UAE proves it can provide fair trials and protection of human rights in line with the standards required by the Human Rights Act, European Convention of Human Rights and Universal Declaration of Human Rights.

Thanks to the good sense of UK-based British judges in the extradition courts, it has been more than a decade since anyone was extradited from the UK to the UAE. There have been plenty of requests, the seven Emirates are very trigger-happy when it comes to using international legal channels to ask for people to be delivered to the Gulf who have committed no crime but are a thorn in the UAE’s side or of a influential person resident there, abuse of the treaty is rife. And the treaty exists under which requested persons can be sent. The reason no-one has been extradited for so long is that it has become crystal clear that anyone extradited will not get a fair hearing, that there is a real risk of torture, discrimination, is likely to be held in squalid prison conditions, with little or no legal or humanitarian support and Given that the treaty is not used, it should be at least suspended, if not abolished. Suspension is fine if there is a reasonable expectation that the Emirates are moving towards a system of justice that offers accused people fair trials and reasonable conditions of detention. Unfortunately, there is no sense that the UAE is moving in this direction, in fact the number of arbitrary arrests and detentions is increasing.

Human rights violations, risk of torture, discrimination and unfair trials are rife within the United Arab Emirates justice system, and any person being extradited from the UK to face trial or punishment in the UAE is likely to be deprived of their basic rights and dignity. Join the Campaign of Detained International to petition the United Kingdom parliament to suspend the extradition treaty between the UK and the UAE.

Since the English High Court extradition case of Lodhi v Home Secretary in 2010, no British citizen has been extradited from the UK to the UAE. The High Court found there was a real risk Mr Lodhi would have been tortured or subjected to inhuman treatment had he been extradited as requested. The same court described the UAE as ‘a state which respects human rights in a very selective way’ and pointed to ‘brutality in punishments’ in UAE prisons.

This, however, has not stopped the needless arrests and court hearings in the UK that occur as a result of a growing number of extradition requests by the UAE, each one incurring hundreds of thousands in wasted costs and putting a significant burden on the UK taxpayer. In a case involving a Scottish grandfather whose Emirati son-in-law tried to have him extradited after the grandfather sought to bring his daughter and granddaughter to safety, the law was described as ‘revenge extradition’.Under the current system, provisional arrests can be communicated through Interpol (the international police network), yet this system is constantly abused by the UAE. There are countless extradition requests made each year by the UAE to the UK, mostly for cases not even considered crimes outside the Middle East.

The UK Government is well aware of – and indeed holds – extensive and reliable evidence of human rights violations in its extradition partner. This includes factual evidence and expert presented by the British human rights lawyer David Haigh, who was imprisoned without charge in Dubai for over 15 months, with no police investigation or formal interviews being conducted into the allegations against him. During this period, he was tortured and sexually abused. Along with others unjustly accused by the UAE, he continues to fight extradition through the UK courts.

SOME EVIDENCE OF WHAT AWAITS ANY BRIT EXTRADITED.

In 2017 Sherriff T Welsh in The Lord Advocate (for the Government of the United Arab Emirates) v Garnett Black 2017 SC [EDIN] 77 held, as it related to the evidence of Detained Internationals David Haigh “(71) David Haigh struck me as an honest intelligent witness who gave his evidence with calm dignity. He was obviously a man who had been significantly physically and psychologically damaged by his ordeal in the UAE and was in the process of what I consider will be a long recovery.

The focus of his evidence before me related to why he was in Dubai in May 2014 and what happened to him, in police detention, during the trial process there and in prison custody after his conviction.

With regard to these matters, I believed him when he said he was lured to Dubai. I believed his evidence when he indicated that high ranking Emiratis have influence over and access to the police and other aspects of civil society.

I have no doubt he was telling the truth about seeing a civilian lawyer who acted for his former employers, in Bur Dubai Police Station in the company of a police officer pointing at him, before being questioned and beaten by police. The clear inference that that civilian lawyer had influence as to how he was badly treated and abused by the police, is irresistible.

I fully accept he was repeatedly seriously assaulted by Dubai police officers and Tasered while detained at Bur Dubai Police Station. I accept he was interrogated and forced to sign a document in Arabic the content of which he could not understand.

Thereafter, I believed the account he gave of squalid, overcrowded and insanitary detention conditions in Bur Dubai Police Station. I further believe he was sexually assaulted and raped in the car park of that Police station during his detention.

I am also satisfied that the evidence he gave about poor consular access and no consular protection while in custody is true. In addition I believed him when he said the police authorities were both actively engaged in institutionalized racism against non-Muslims and non-Emiratis within the detention block and complicit in the racial abuse administered to non-Muslims by local prisoners within the detention center.

I would have had little hesitation in preferring the direct tested evidence of David Haigh over the untested and limited narrative in the Lord Rowbotham document”.

The full case report can be found here https://www.scotcourts.gov.uk/docs/default-source/cos-general-docs/pdf-docs-for-opinions/2017scedin77.pdf?sfvrsn=0

No other Briton should live through this ordeal.

Detained International c/o Haigh International Justice Summit House 12 Red Lion Square London, UK WC1R 4HQ info@detained.org.uk
We use cookies on our website to give you the most relevant experience by remembering your preferences and repeat visits. By clicking “Accept All”, you consent to the use of ALL the cookies. However, you may visit "Cookie Settings" to provide a controlled consent.
Cookie SettingsAccept All
Manage consent